April 17 - STEAL SOMETHING FROM WORK DAY 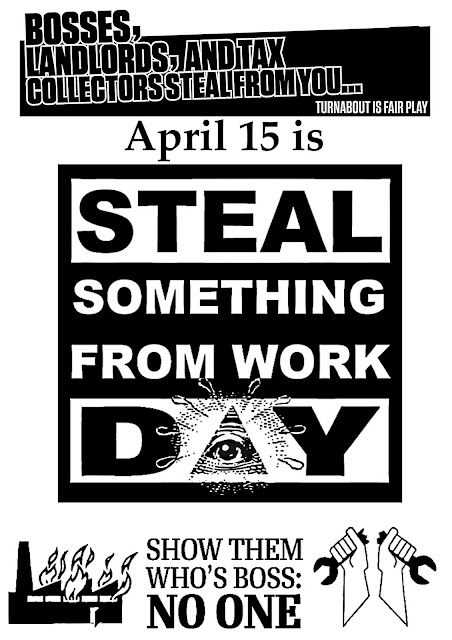 Does your boss work less than you but take home a bigger paycheck? Is somebody zipping around in a private jet at your expense? If the corporation is making money at the end of the day, that means they’re not paying you the full value of your labor – that’s where corporate profit comes from! So if you need something in your workplace, take it. You earned it!

It could be a paper clip, or some cash out of the register, or full-on embezzlement. If you’re a barista, grab a bag of coffee; if you work at a garage, get a wrench set. If you’re unemployed, take something from someone else’s workplace! Unemployment works for the bosses, too – it forces people to take any job they can, and sends the message to other workers that if they don’t knuckle under they’ll be in for it too.

You could share it with your friends, or give it to your family – the family you never see because of your job. You could use it yourself, to do something you’ve always dreamed of – maybe something making use of all that potential you would fulfill if only you didn’t have to work for someone else all the time.

Steal something from work! Break down the divisions that separate you from your co-workers. Work together to maximize your under-the-table profit-sharing; make sure all of you are safe and getting what you need. Don’t let the boss pit you against each other – in the end, that only makes all of you more vulnerable. Build up enough trust that you can graduate from taking things from work to taking control of your workplace itself!
Chances are you already steal from your work – if not physical items, at least time on the clock. Good for you! But don’t stop there – think of how much more you could take, how much more you deserve.

Frequently Asked Questions about
STEAL SOMETHING FROM WORK DAY


Is STEALING SOMETHING FROM WORK immoral?

Stealing is immoral, yes. That’s why your employers should pay you the full value they obtain from your labor, rather than a fraction of it. If you take something from the workplace, you’re not stealing, but simply taking part of your fair earnings.


Is STEALING SOMETHING FROM WORK illegal?

Technically, it may be. Slavery, on the other hand, was legal until December 1865.
Wage slavery still is.


Is STEAL SOMETHING FROM WORK DAY anti-employer?

Hate to break it to you, boss, but your employees steal from you every day. By encouraging them to cut it down to one day a year, we’re looking out for you! Consider it a harm reduction approach to loss prevention.


Does STEAL SOMETHING FROM WORK DAY make it harder for employees to get away with stealing?

Not significantly. The number one obstacle to employee theft is not bosses or cameras, but misguided coworkers. STEAL SOMETHING FROM WORK DAY promotes worker solidarity and legitimizes employee redistribution of wealth.


Not everyone has an easy time stealing from their workplace. Some demographics are singled out for surveillance, and many people can’t afford to risk getting into trouble!

That’s true! That’s another reason why, if you are not one of those people, you should quit being such a wise guy and STEAL SOMETHING FROM WORK to share with those who can’t take it themselves.


I’m retired. Can I participate in STEAL SOMETHING FROM WORK DAY?

Yes, you can – just go back to your former place of employment! If you had to wrestle over a pension with them, they’ve probably got it coming. It’s never too late to STEAL SOMETHING FROM WORK!


I’d love to STEAL SOMETHING FROM WORK, but I work at a local non-profit foundation providing services to survivors of domestic violence.

If you truly love the place you work, chances are it’s under-funded. That’s because the for-profit mega-corporations are hogging all the resources! Time to pay a visit to someone else’s workplace.


But my employers give to charitable causes when they make a profit! If I STEAL SOMETHING FROM WORK, they’ll have less to donate.

Who do you think should choose the most deserving charitable cause for your earnings – you, or some corporate bureaucrat? Just because you STEAL SOMETHING FROM WORK doesn’t mean you have to keep it all for yourself!


If I STEAL SOMETHING FROM WORK, will it make me a more selfish person?

Not necessarily! By and large, people find it easier to share things when they get them for free than when they have to trade their lives for them in drudgery. So STEALING SOMETHING FROM WORK might actually make you a more generous person!


What does God think about STEALING FROM WORK?

Academic theologians (such as German Old Testament scholar A. Alt, author of Das Verbot des Diebstahls im Dekalog) suggest that the commandment "thou shalt not steal" was originally intended against stealing people – against abductions and slavery. This lines up with Jewish interpretations of the statement as "thou shalt not kidnap" – for example, as stated by Rabbi Shlomo Yitzhaki, famed as the author of the first comprehensive commentary on the Talmud. If this is so, the real crime is not the worker taking back a part of the fruit of his labor, but the economic system that forces him into wage slavery in the first place. Likewise, as Jesus explains, "It is easier for a camel to pass through the eye of a needle than for a rich man to enter the kingdom of God" (Matthew 19:24) – don’t put your employer at such risk!


What if I STEAL SOMETHING FROM WORK and my company goes out of business? Is this biting the hand that feeds me?

Corporations plan workplace "shrinkage" into the budget well in advance. They’re practically counting on you to steal something! If that surplus goes unclaimed, it’ll just stay their coffers as more unearned profits.


Will the costs of STEALING SOMETHING FROM WORK be passed on to consumers?

Your employers are shrewd businessmen – if they were simply trying to distribute goods to the needy as affordably as possible, they’d be in a different line of work. That means if they could be charging customers more, they already would be.

Are you kidding? Who does all the work in this society – bosses, or workers? If anything, things would go more smoothly without them. If every corporation went out of business tomorrow and we could get our hands on all the resources they’ve hoarded, don’t you think we’d be able to distribute them more sensibly? They’re lucky we don’t steal everything!


Will STEALING SOMETHING FROM WORK inhibit real social change? Shouldn’t we be organizing to address the root of our problems rather than acting individually?

Perhaps you’re onto something! But STEALING SOMETHING FROM WORK doesn’t prevent you from organizing collectively. For example, you could coordinate with your coworkers to share what you pocket. Really, what good would it do to get organized together if you were still afraid to take what you deserve? On the other hand, imagine if we could go beyond taking things from our workplaces, and take over the workplaces themselves ...


Why is April 15 STEAL SOMETHING FROM WORK DAY?