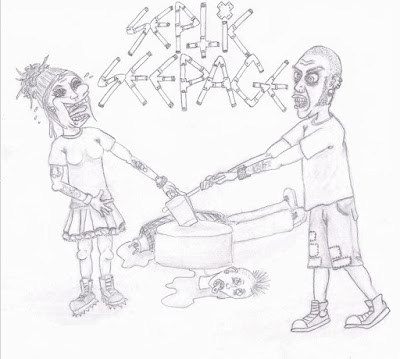 This morning from 9.00h anti-riot-police evicted illegaly CSO L'Estella in
Banyoles (Girona)! The 2nd court of Girona tribunal is responsible for all
the illegal process (today without any advice nor to our lowyer) from the
beginning to the end. Because of the sorprise noone of the assambly of
the Squatted Social Center was present. They closed everything with
walls and chains, including two areas aside of L'Estella. Seems that the
new owners (BBVA bank) paid well to the judge!
Keep attention for new calls from our side!
Health & hate!
One eviction another squatting!
For the Anarchy!
Posted by A.Person at 4:28 PM

Fight the European right -- for a true social awakening

On 6 February 2016, right-wing organisations in 13 countries are planing a joint day of action against European refugee policies. These organisations include radical right-wing groups like the Front National (France) as well as militant groups like Golden Dawn (Greece), who do not shy away from taking up arms and killing their political opponents and refugees. Leading the way is the Pegida movement from Dresden, Germany.
At no time since 1945 have people in Europe been so threatened by the dark veil of fascism. The Europe-wide actions as well as the influence of right-wing radicals on governments in France, Hungary and Poland, for example, show just how professional the network as well as the financial capabilities of this movement have become. By contrast, the networks and ability to mobilise of emancipatory leftist and anarchist structures are not nearly as well developed.
What we are currently experiencing is the radicalisation of hundreds of thousands of people in Europe, which is for the most part based on their fear of social decline, hardships and lack of perspective. Current events will determine whether such a radicalisation will turn on outsiders or turn into a common, emancipatory struggle of the underprivileged for a fair economic and political order.
A struggle that only focuses on counter demonstrations will most certainly lose. Counter protests are of course better than doing nothing. But over the medium term, we can only oppose the right-wing ideas which are spreading like wild fire with our own solution and explanations. We have to show that the solutions offered by the right (i.e. repression, isolation and aggressive foreign policy) will at most slow down the increasing precarity and poverty for a while at the cost of our own freedom and the lives of others. We have to show that the inequality, disenfranchisement and lack of perspective of the vast majority of the human race is a necessity of capitalism, and that the dream of jobs for everybody is dead and buried. Finally, we have to show that most refugees are fleeing and traumatised because the current economic order persists. Capitalism lives from humiliation, brutal oppression and wars on entire continents.
Even if our support of refugees and migrants costs us much of our energy, we cannot ignore the increasing precarity of those with the same citizenship as us. We have to support and help organise their struggles, so as not to play into the hands of the radical right and to become bourgeois paternalist philanthropists ourselves.

For this reason, we call on you not only to take part in anti-fascist counterprotest and self-defence on 6 February, but also to show an alternative to the current misery through direct action, solidarity, anti-parliamentarism and self-organisation, i.e. the entire bracket of anarcho-syndicalist activities. We call on you to unmask the European right as what they truly are: the best thing that could ever happen to capitalism and its endeavor to prevent a sorely-needed class war and an alliance of the oppressed.
Stop the enemies of our emancipation! Towards a free and anti-capitalist future!
Free Workers' Union Dresden, 24 January 2016
http://www.fau.org/artikel/art_160128-160923